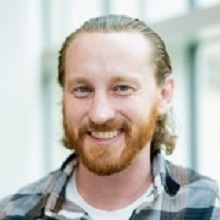 Justin Smith grew up in Houston, Texas and earned his BA in Theatre from Southwestern University in Georgetown, Texas in 2004.

After working for a few years in several different fields (as liberal arts grads tend to do) he decided to pursue his education in theatre with the intention of working in higher education.  He attended the University of Virginia and earned his MFA in 2011.  It was during that time that he first came to Santa Rosa and the JC working for SRT as Technical Director for three seasons and Production manager for two more after that.  While not in Santa Rosa, he worked for Trinity Rep in Rhode Island and then Zach Theatre in Austin, Texas.  For the last seven years he has worked as Technical Director for Southwestern University developing their scenic technology program.  In addition to building and realizing their seasons, he has worked with the University in recruiting for the school as well as participating in the theatre for young audiences program.

He is delighted to join the outstanding program that is the SRJC Theatre Arts Department and is eager to contribute and support the program.